By sunrise, I had a peek out the window and caught a glimpse of Lake Baikal before heading through the mountains and journeying for another hour to Irkutsk. I caught as much sleep as I could, and by 7am, we were due to arrive at the capital of Siberia.

At this point, it was time to say goodbye to the girls. I made my way, met my agent, and was taken to be transferred to Listvyanka village on the coast of Lake Baikal, which was about an hour’s drive away. It was a chilly day, of about 10 degrees.

Along the highway was a nice journey. Lots of green and forest land. One thing I noticed about the car is that it was a right-hand drive, like in Australia, but still driving on the right-hand side of the road, which was odd.

Upon arrival at the village of Listvyanka, at the shore of the lake, I was taken to the homestay and I had some tea. I got to my room, put my stuff down, then went out for a walk. I needed to buy something to eat. I had a look around, walking along the shore, looking for some photo opportunities. I had this place for two days. 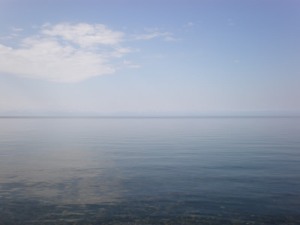 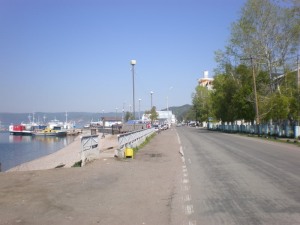 The lake was very clear and beautiful. I heard that you could see a rock sink down for up to 40 metres – quite clear indeed.

I was also quite tired, so I decided to trek back to the homestay to have a nap. There’s plenty of daylight here at this time of the year, so I had more than enough time for a nap.

Afterwards, I headed back down and decided to take in much more of this lakeside village. I took a five-kilometre long walk along the coastline, all the way to the next village, and I took plenty of photos along the way. 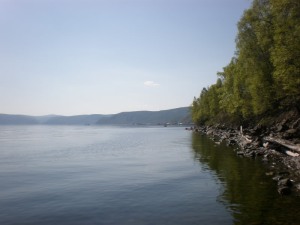 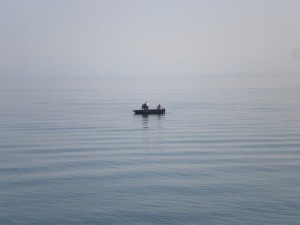 During one of my photo captures, my foot managed to slip off a rock and fall into the water. I had to backtrack several kilometres in soaked shoes – but it was well worth it. I only wished it was warm enough to take a swim.

It was also interesting to see how the horizon blended into the sky. It was confusing at first. I didn’t know exactly where the horizon was, or why it was misty. But it was definitely magical regardless.

After my pleasant stroll, I headed to Mayak Hotel to treat myself to dinner. I ordered pelmeni dumplings, which I’ve missed!

I still need to get my visa registered, hopefully it won’t be too much of a problem. Apparently it’s meant to be done within 72 hours of my arrival, however, the following Monday is a public holiday, so the registration office will be closed. That aside, it has so far been a great holiday.