Today, the epic train journey begins. I checked out of my hostel by 6am, and made my way over to the train station across the road. I couldn’t wait to get on board.

The train station had security detectors at the entrance. That was not usually like a train station, from what I knew. I headed through, was able to find my platform with a little help, and waited for my train in the waiting room, along with several other tourists embarking on the same journey.

I had plenty of time before the train would be ready for embarkation. I didn’t do much. I just sat there and waited.

By the time the train was ready for boarding, I showed my ticket and proceeded through the gate. I could already tell which train I was getting on. Compared to all the rest of the trains, you could tell which one was soviet-style. I boarded my carriage, and found my allocated seat. My cabin looked nice, and comfortable to sleep in. I would be here for the next 30 hours.

Before long, I was accompanied by a British tourist, Darren Hurst, who shared my berth. I’ll have someone to talk to during the whole trip. We became acquainted and talked about what fellow travellers would talk about.

The train set off, and our journey had begun. Darren was booked with the same tour company that I was booked with. Our paths, however, were slightly different. It would only be this leg of the journey, from Beijing to Ulaanbaatar, that we would accompany eachother. I was staying in Mongolia for five days, and he was for two.

As the city views of Beijing washed past, the air became clearer, and the journey more scenic. We started passing through beautiful mountain and lake scenery over the next few hours; scenery of which was very different to what I was familiar with. It was amazing. I was loving this journey with all my heart. Darren took some pictures, while I rolled some video.

Darren and I chatted away to pass the time. When we got bored, he pulled out his laptop and we watched a movie; District 9. It was a very weird movie. Prince of Persia was playing on the train TV-screens, but it was dubbed in Chinese. I’ve already seen that movie anyway.

After stopping by a few cities and towns along Northern China, such as Datong and Jining, Darren and I went to the restaurant car – which was about 8 cars away – and sat ourselves down for dinner. I ordered some bacon slices with mushroom and rice. It wasn’t the best tasting food, but it was still great. It just seemed home-made. Catering for passengers wasn’t top priority for the train attendants.

We continued through the rest of northern China, reaching the border town of Erlian by nightfall. 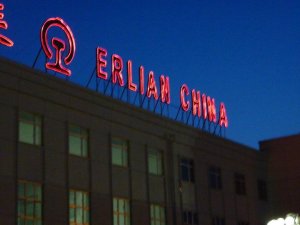 Erlian was where the train had to change its wheels to fit the narrower soviet gauge tracks. During this time, immigration officials boarded the train and took our passports. I decided to leave the train and check out the station. I wouldn’t be able to board the train again until after the operation is complete. Darren decided to stay on. You could either stay on, or get off. By staying on, you would not be allowed to use the toilets; something of which I needed.

I wandered around the station, having a look for any supplies, and having a look around town. I didn’t explore too much. I looked up at the night sky, though, and there were plenty of stars. Quite a starry night, considering it’s China. I chatted with a few other fellow passengers while waiting for the train to have it’s wheels changed. I sat up in the waiting room for most of the time, and occasionally got up and walked around to help pass the time. I noticed the immigration officials in their offices stamping people’s passports while I was at it. All in all, it was after about 4 or 5 hours that the whole immigration and train procedures were complete.

I hopped back on, and found Darren in the compartment. He told me what it was like from his point of view when they were changing the wheels on the train. We crossed the border into Mongolia, faced immigration officials once again, then when it was all over, I could finally get some sleep and await tomorrow’s adventures.