I managed a fair few hours of sleep while en route to Beijing. Leg room here was smaller than the A380’s. I was on a regular passenger jet.

By the time the sun rose, we were given breakfast, and I watched as China came into view of the window. As I got closer to Beijing, the land began to disappear under a thick haze, which I was guessing was the insane amount of air pollution. It’s pretty bad in China. I’ve seen pictures of Beijing before, and I was expecting to see the same amount of smog.

So upon landing, after a rough descent, that was what I saw as soon as Beijing came into view. An atmosphere heavily filled with harmful smog. I take it that won’t be fun breathing in.

Once I had landed, I felt great as an independent individual, but at the same time, this place looked like it had a cold attitude to it. I still needed time in getting used to the fact that I was away from home. Maybe I’ll feel better once I’ve reached my hostel and have a bed to rest on.

I proceeded through immigration. My first ever visa has been checked. And to get from one part of the terminal to the other, there was a train car. I rode the train and made my way to the main terminal. I decided to give my parents another call from a payphone. It was a little bit complicated setting up the phone card, and I had to ask a nearby attendant for help.

When I was done, I took a map of the subway system and city centre, and hopped on the airport metro, which got pretty crowded the closer to the city I got. I easily found my way to where I needed to go; the Beijing City Central Youth Hostel, conveniently located near the Beijing Railway Station, my departure point for Mongolia in the next three days.

So I checked in, got the key to my dorm room, and got this heavy bag off my back. I needed a padlock for the baggage locker, so I bought one from the hostel shop. I put everything away and locked it securely. Then I went to have a nap. I was very tired, and it was still pretty early in the morning.

I woke up at about noon. It was time to go out and explore. My first area of interest was the Forbidden City. I gathered all the required information from the hostel lobby, and, looking at the metro map, found out which stop I had to get off at. I crossed the road, buying myself a metro ticket, costing 4 Yuan. At first I tried to pay with a 5 Wu Jiao note, which I didn’t realise was worth half a Yuan. The lady corrected me and I pulled out a different note.

I proceeded through, boarded the metro and got off at Tian’anmen East station. From here, I was able to find my way easily to the Forbidden City, as it was just right outside. The place seemed very large and widely open. I was approached by a local student, who initiated conversation with me.

This was definitely new to me. She asked me where I was from and what I was doing here. We got along like new acquaintances. She then offered to show me one of the student exhibits, near the entrance to the Forbidden City. The exhibit displayed some nice silk paintings. While the artwork was nice and all, I didn’t want to buy anything, mainly because I didn’t want to carry it with me, but the lady insisted and told me of her personal struggles. I was conned into buying a silk painting. It was only 20 Yuan ($4), so it wasn’t too bad. I left and made my way to the entrance of the Forbidden City, which was a fair walk. 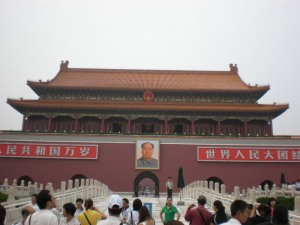 Once I got to the actual entrance, I found the ticket stand and bought myself entry. I was approached by several other Chinese “students” around this area, who offered to guide me. I didn’t want to take part.

So I entered the Forbidden City, and what I saw was nothing short of amazing. 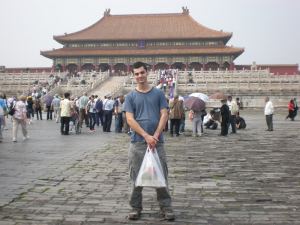 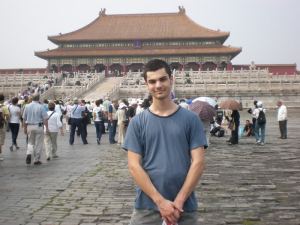 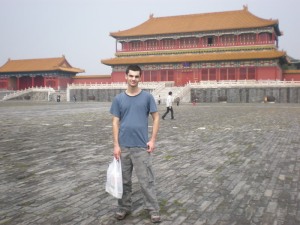 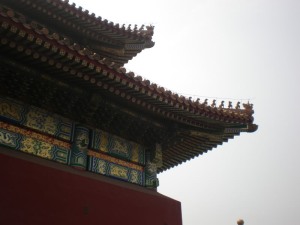 I felt like I was in ancient China, and that was something I really loved. Ancient sites are among my favourite types of tourist attractions wherever I go. I like to immerse myself and imagine being here during the ancient times. Chinese culture is one of my favourites.

At the other end of the City, I left quite happy with what I saw. Soon after, another “student” approached me, asking me if I spoke English. So I said yes, and we started to talk. We walked along the road. She asked all about me, where I was from, what I do back in Australia, my career goals, and what I think of China. She seemed to be a legitimate and friendly student, who would randomly approach tourists in order to practice their English.

She offered to take me for a cup of tea. Sure, I didn’t expect tea to cost anything more than $2 or $3. So along the road we walked, and shops we passed, we went into a teahouse. I was sat down in a nice traditional looking room, with polished tree trunks as stools, fancy wooden tables and decorations, and a nicely dressed waitress. The room looked very nice. I was shown the ritual of serving tea, and given several different samples, each from a tiny cup. I was not aware of the prices, and I was not aware that I would be paying for the “samples”. After a few sips of tea, trying different flavours, I was getting a little cautious and worried. I asked the “student” who brought me here how much I would be paying. And guess what? It was a pretty large bill. 660 Chinese Yuan. That was the equivalent of 100 Australian dollars. I thought, 100 dollars for a few tiny cups of tea and some snacks in a fancy room? I asked if we could split the bill, since we were both having every sample of tea. I wasn’t going to pay for hers. So we agreed to split it, and I paid 330 Yuan. It was soon after, that I walked out and we said goodbye and went our separate ways.

So, I figured, I got scammed. It was a pretty common scam too, these people certainly have an innocent way with persuasion! I wasn’t too happy, but at least it was only $50. It could have been much worse. Let’s just hope I don’t get involved in any more scams. And at least the tea was nice. I’d have been happy with the teahouse experience had I not had to fork out all the rest of my cash in my wallet. You learn, I guess.

So from here, I just made my way back to my hostel and called it a day. I went to the internet cafe downstairs and showed my passport. I decided to upload all the photos I had taken, and show all my friends. I couldn’t access Facebook, though. China seems to have it blocked.

By dinner time, I headed onto the street and found a restaurant. One that wasn’t too expensive. I ordered a bowl of noodles with meat, costing only $4, including the Fanta drink, which the waitresses just referred to as “orange juice”. I enjoyed my meal.

Then I headed across the road, having to walk across an overhead bridge, to get to the railway station. 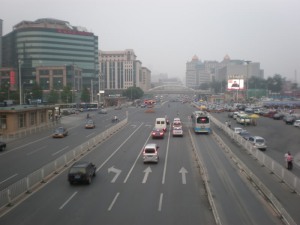 I was in search of a phone booth. I needed to ring and confirm with my tour to the Great Wall tomorrow. I found a set of regular phones on a table, which a guy was in charge of. I asked with hand signals, “how much?”, and he showed me four fingers. I assumed it would cost 4 Yuan per minute. So I dialled the number, called my tour company and got everything clarified.